I was this close to shooting my own blue goo.

Hollywood actress Jennifer Lawrence has the unfortunate burden of being the centerpiece of a story we're all too familiar with: Even the most advanced technology can't protect your boobs. With a recent torrent of nude photos of Lawrence and other celebrities acquired by hackers hitting the Internet, Lawrence's publicist responded in a statement that this was a "flagrant violation of privacy."

However, there are other victims than just celebrities; another group of people who've also been flagrantly violated. I'm talking about those of us who've been jacking it to Jennifer Lawrence long before her private stash of self-nudies were literally exposed. We, too, are victims who've had to make it work as best we can to pump out a few rounds into a sweatshirt sleeve by watching JLaw's scenes from the last two X-Men movies. 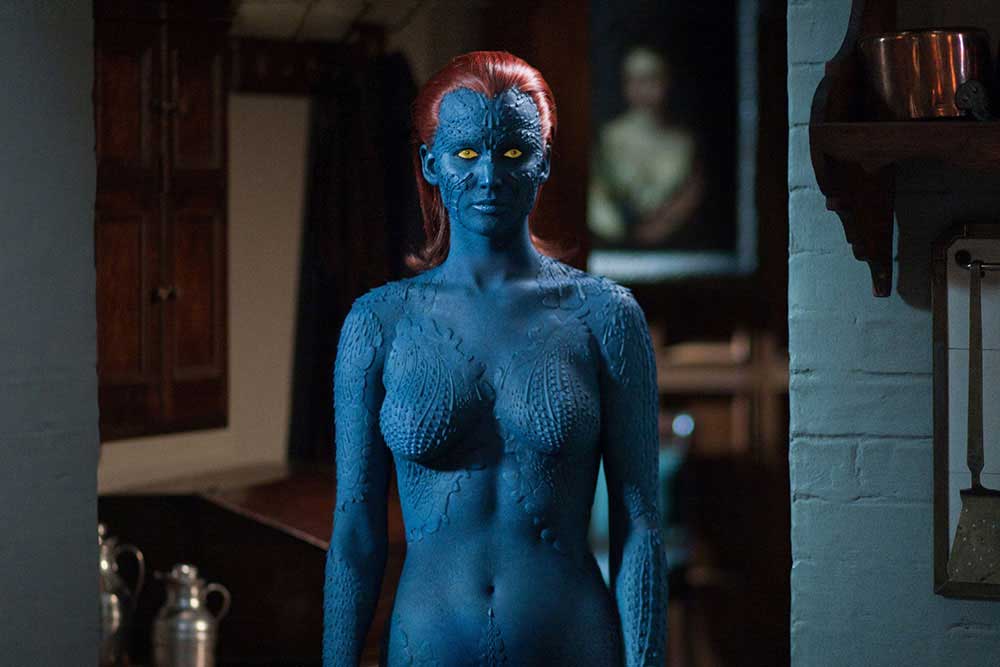 Let's be honest. JLaw didn't show much in Silver Linings Playbook. We hardly even saw her in American Hustle. Luckily, her casting in X-Men gave us the best, closest thing to a nude Jennifer Lawrence we could have ever hoped for. Sure, she sported that awful haircut Gene Simmons has today. Yes, she glared at us through those creepy cat eye contact lenses desperate college girls wear to raves. No, we won't deny that she made us tingle with delight thanks to that unforgettable blue skin adorned in a texture not too dissimilar to that of a BFGoodrich Mud-Terrain tire. Beggars can't be choosers.

There are a lot of neckbearded assholes out there who think they're hot shit because they can easily rub one out with a mere glance at a My Little Pony fanfic, but it takes a lot of work to train your body to maintain an honest erection watching a walking beta fish with tits perform martial arts. For those of us who have been fans of Jennifer Lawrence since the beginning, we managed to make it work, but a lot of compromises had to be made.

Her casting in X-Men gave us the best, closest thing to a nude Jennifer Lawrence we could have ever hoped for.

Over time, JLaw was given the prestigious honor of being added to my new and quickly growing list of masturbatory fantasies involving mysterious blue creatures. She had earned her spot right between Neytiri and the tentacle opera singer from The Fifth Element. Sorry, Marge Simpson.

Now, blue is the only thing I can jack it to. And I'm not alone. There are many of us out there, brothers and... well, just brothers who have lived in the shadows in shame and fear too long.

With the accidental click of an ambiguous link to "Jennifer Lawrence Nude," many of us had the expectation of seeing her blue visage with a pair of silver dollar nipples in a lovely shade of deep violet. To our surprise and utter dismay, seeing her true, soft, pink, smooth epidermis was devastating. All the Avatar marathons, raw foreskin, and thick palm calluses we put into preparing upcoming lonely Friday nights dedicated to Jennifer Lawrence now mean absolutely nothing. Around the world, thousands of sweatshirt sleeves will end up not getting wrinkled throughout the night, nor end up stiff in the morning.

So, thanks a lot iCloud Hacker Guy. JLaw is no longer on my list. Welcome back, Marge.