While scholars may debate whether it was Mark Twain or Lord Byron who first coined the term "truth is stranger than fiction," it's hard to dispute how utterly frightening the story of the 1982 fantasy adventure film The Dark Crystal parallels the chaos in today's world with exacting detail. The recently washed fabric of my underwear is in mortal danger at the notion Jim Henson was ahead of his time because he had knowledge of the future.

Think about it. The story of The Dark Crystal pits a young Gelfling named Jen, the last remnant of a once proud and free civilization, against the corrupt and tyrannical Skeksis in order to restore balance to the world of Thra. Who would name a fantasy world Thra in the 1980's and have an effeminate dude who can't grow a beard named Jen living it? Someone who grew up with words like "totes" and "adorbs" would, that's who!

So, put on your wetsuit, Alex Jones, because we're going diving.

Just like the politicians of today, the Skeksis have a seething ambition for self-interest and an unquenchable thirst for power. The Dark Crystal helps them retain their authority and relevance much like Twitter, Facebook, and the mainstream media help people remember how to spell Brian Stelter's name. Pit them against a seemingly harmless fuckboi who has been silenced his entire life as the protagonist and you have all the ingredients for an insanely accurate, autisticly detailed depiction of today's world. That's right. I'm convinced Jim Henson was a fucking time-traveler who came back to warn us all of our impending doom through the tales of his creative puppetry.

Now, after the opening credits of The Dark Crystal, we're shown the Skeksis surrounding their dying emperor in his private chamber, waiting for death to arrive so that one of them can usurp his power and continue a reign of terror. The resemblance of these creatures to the cantankerous shrieking of Nancy Pelosi is incredibly uncanny, as is their impatient and abrasive behavior, each drooling at the opportunity to seize an ornate staff that lies next to their fading leader. The emperor desperately holds onto it, choking through his final breaths with the identical incoherence and exhaustion of a Joe Biden speech. It's a scene that could replace the looming heirs portrayed as lizard people with the likes of George Soros, Justin Trudeau, Daniel Andrews, Bill Gates, Klaus Schwab, or Sebastian Kurz and go completely unnoticed. 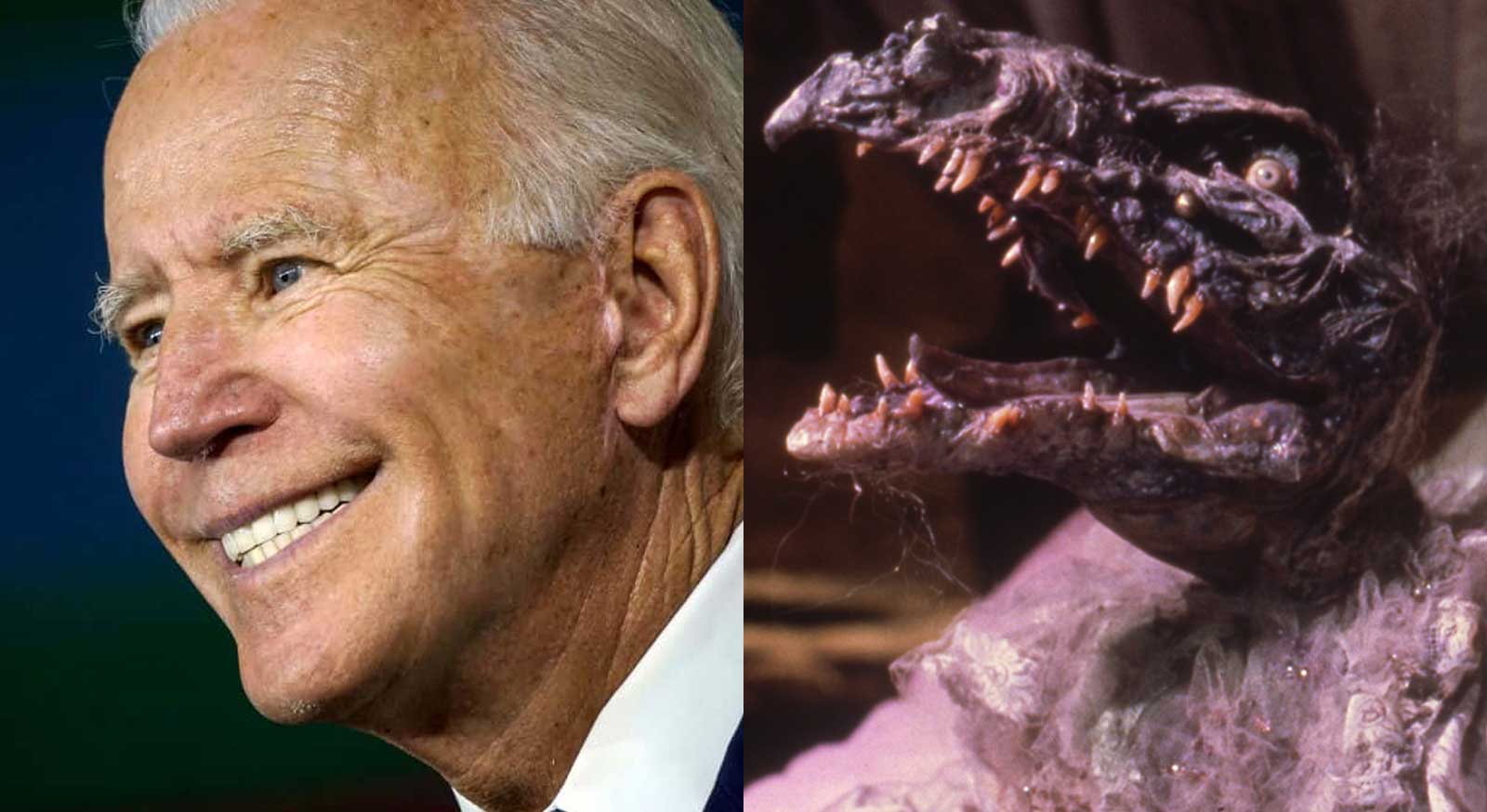 The frail and ending reign of the emperor is the future of Joe Biden.

The preciseness of these scenes mirroring the press conferences and interviews we agonizingly watch today are shitstrikingly remarkable. There is no way Jim Henson could've envisioned The Great Reset unless he was born near the end of the century, witnessed this fucking insanity for himself, then built a time machine to travel back and help us survive it. Just the mere thought makes it difficult to not violently delete the pleasant scent of Tide emanating from the surface of my pants.

Jen must travel through the various landscapes of Thra and reach the Dark Crystal to adjoin a shard he has acquired and put an end to the Skeksis. Among the many crystal remnants that exist, only the one True Shard can be used to heal the Dark Crystal. In the future dystopia where Jim Henson originated, shard technology must be the evolution of USB sticks. Jen's shard likely symbolized VAERS data, censored medical expert testimonies, and links to falsely debunked independent journalism posted on free speech social media platforms. It all makes sense now!

Jen is later joined by Kira, another Gelfling who has been forced to remain hidden beneath the shadows in fear of being discovered by the Skeksis, ready to lend a hand and a pair of wings. She is a stark reminder of those today who have been cancelled, but must rise above the mutiny of society to restore truth and integrity through balance. Christ Almighty, can you believe this? Jim was telling us how to deal with fact checkers and misinformation forty years ago! Not even a George Floyd home video can get this deep!

Throughout Jen's adventure, he encounters characters such as Aughra, an oracle living in an observatory who can only signify the podcast musings of Joe Rogan. Hell, she looks just like him if he'd use a little Keeps, yanked an eye out, and grew a pair of titties. Jen must also contend with flying Crystal Bats, deployed to track and locate him, representing the eavesdropping tactics of the NSA and FBI with the same creepy disposition of the people they employ. And how could we have not seen it sooner that Jim Henson was trying to caution us about Antifa and Black Lives Matter? The Arathim, a spider-like race that are sent by the Skeksis to plunder and destroy everything in their wake, mindlessly ruin the lives of innocent podlings to maintain the status quo of the powers that be. Do you know what this means? Jim was trying to prepare for the future riots of 2020 while people were rocking to Billy Idol's "Hot in the City!" 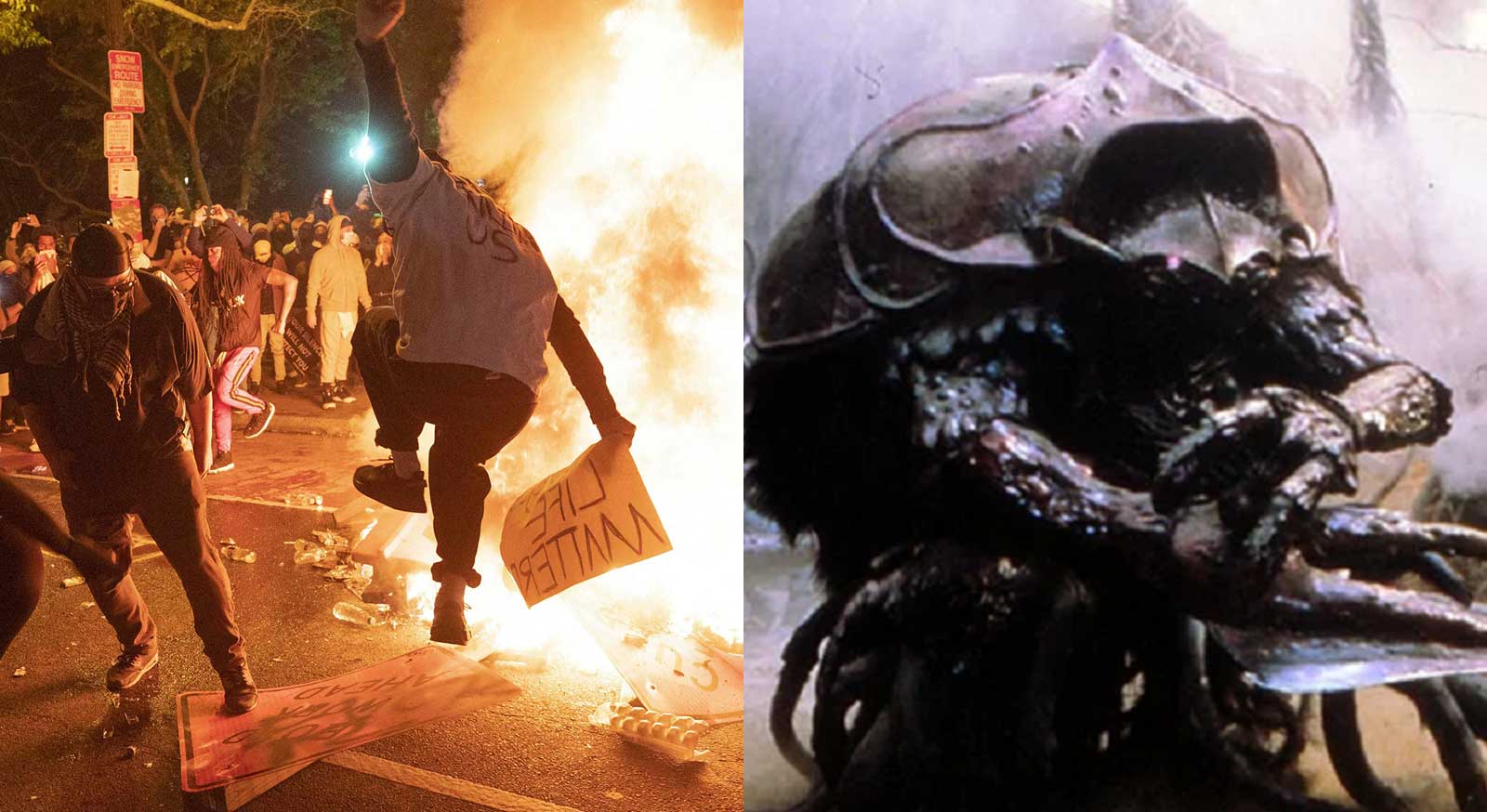 The destructive nature of the Arathim was a warning about Antifa and BLM.

As Jen and Kira get closer to the Castle of the Crystal, we learn more about one of its most vile residents. skekTek, also known as the Scientist, is a Skeksis whose primary role is to prolong the lives of his counterparts. He's discovered how to harness the power of the Dark Crystal to extract the life force from podlings and other creatures so as to quell any threats of defiance or resistance, ultimately making them the slaves of his bidding. His laboratory is ominous, tables and shelves scattered about holding vials, books, and mortar bowls. Cages hang along the walls holding captured animals and victims waiting to be used for nefarious experiments. Who does this psychopath remind you of?

No, nobody closed a window. The sudden lack of a breeze was from my asshole puckering shut at the realization that Jim Henson based this horrendous fiend on the evil exploits of Dr. Anthony Fauci. It couldn't be more obvious! His relentless desire to wield power, the horrifying medical trials he executed on innocent children, the veiny erections he developed torturing dogs, and his previous fabrication of AIDS information? They are all on display here. You can dust off your old VHS copy and still see the connections. Jim Henson was not only showing us footage of the Wuhan Lab, but a biopic of Fauci's entire career! Quick! Somebody send the 4K Blu-ray Anniversary Edition to Rand Paul! 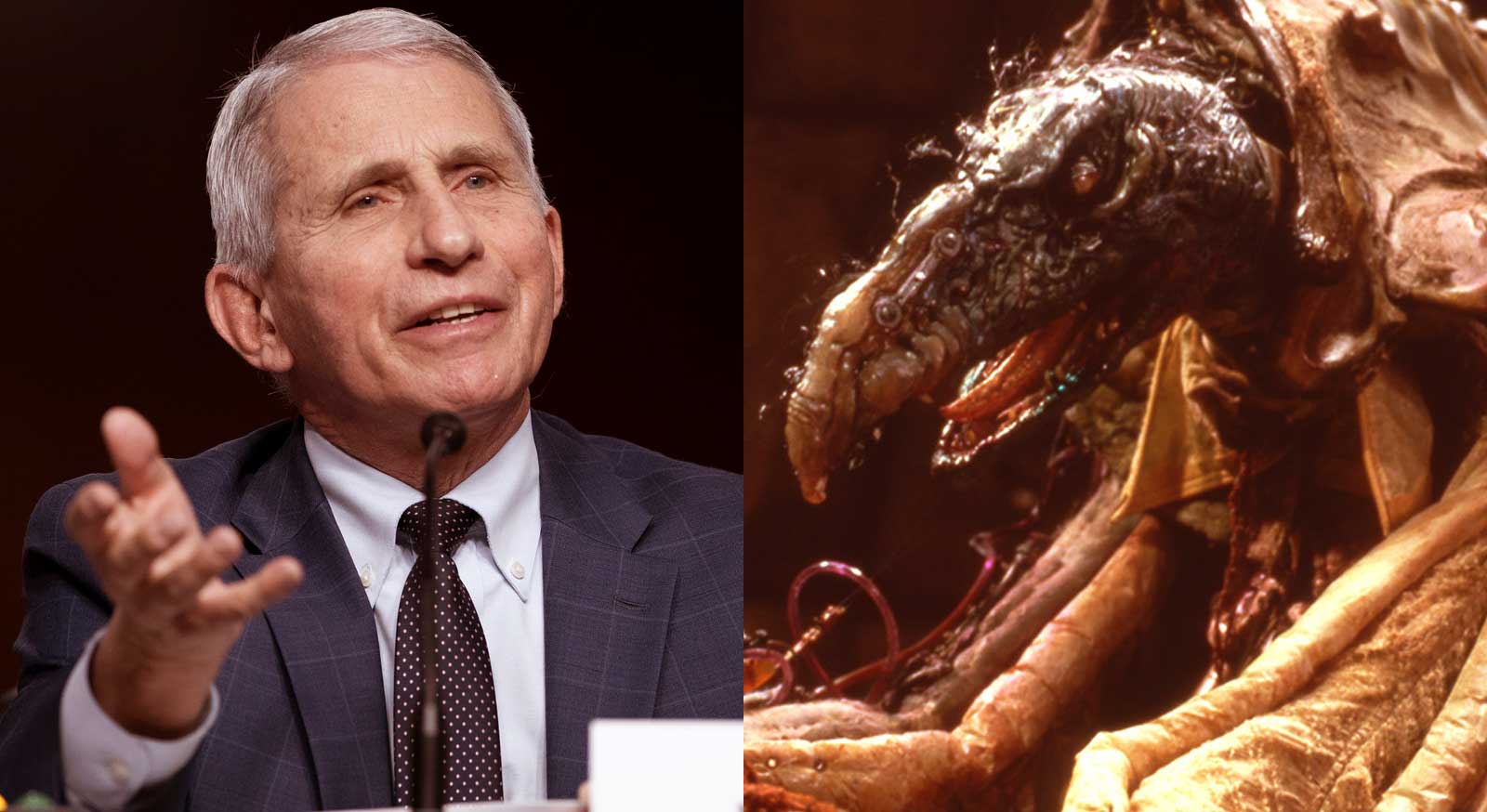 skekTek aka the Scientist was a clue to the intentions of Dr. Fauci.

Alright, let's take a deep breath and calm ourselves down before someone has a vaccine-induced heart attack. The good news is there is light at the end of this terrifying tunnel. Jim Henson warned us about a nightmare we aren't convinced we can wake up from, but the movie's ending should tell us what is yet to come. After all, Jen and Kira are able to defeat the Skeksis by putting the shard back into the crystal. Jim Henson has been spot-on so far, so if his movie continues to play out as our reality is today, it's only a matter of time before Fauci succumbs to the mauling of a dozen Beagles as the world rejects the absurdity imposed by its failed leaders and the morons who blindly follow them.

Jim Henson may have died in 1990, apparently trapped in the past and unable to return to his own time, but we can take comfort in his artistic integrity. Should tyranny strike again, his puppets and the stories they tell are our guides to critical philosophical and moral issues we can derive solutions from. We're now dealing with troubles from the CCP and Henson's next movie credit was 1983's Big Bird in China! Do you still have your bathing suit on?

The 55th anniversary of Star Trek is a bittersweet reminder of a science fiction saga that once expertly challenged moral, political, and philosophical dilemmas.