Poorly executed attempts at censorship that only serve to promote the continued ignorance of society.

If you're like most people, you don't allow complete strangers to make decisions for you. You don't let the waiter choose what you eat at a restaurant, you don't let a department store clerk decide what clothes you purchase, and you don't let your television select which programming you watch. Despite these principles, our society is at the mercy of growing efforts to determine our individual level of sensitivity.

I'm consciously aware of what exists behind the bleeps, the mutes, the dubbed voiceovers, and the pixelated ovals. However, I have no choice in the matter to embrace or loathe them. These poorly executed attempts at censorship only serve to promote the continued ignorance of society.

These six examples of censorship show how our level of comfort or offense is established beforehand, ultimately eliminated from our control. 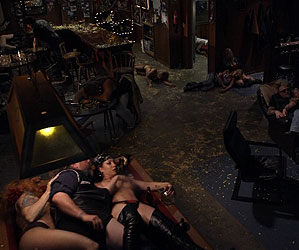 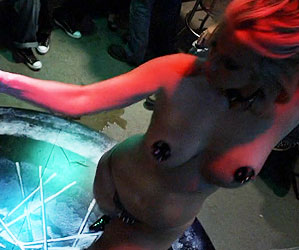 Tits, asses, and Bobby coming up for air with a sticky face and soaked beard after an hour of muff diving.

Sons of Anarchy is back with the recent start of its second season on FX. We're invited to join the party at the biker bar as Bobby Elvis is released from custody after a lack of evidence fails to connect him to the murder of a state official. The venue is packed to the brim with tits and ass and there's no shortage of touching, sucking, and fucking. As the celebration kicks off, we're endowed with the lovely presence of tasty juggs covered with nipple tassles while crazy Bobby has his head buried deep in a biker skank's dirty snail.

After the party is over, the gang is passed out, scattered across the bar with sleepy sluts at their sides. The scene resembles that of any late night Cinemax programming, but FX is forced to gently blur the tiniest nipple exposure among the tit sandwich Bobby rests inside of. 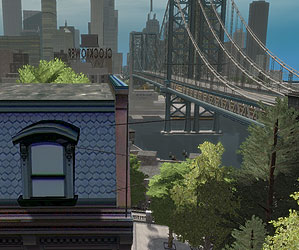 Consensual sex with a woman in which you have a committed relationship with. 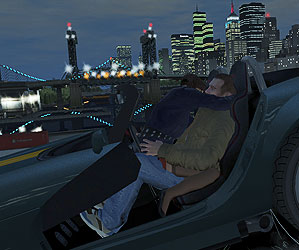 Rockstar Games ran into some legal troubles after the controversial "Hot Coffee" mod revealed a hidden sex game in Grand Theft Auto: San Andreas. It allowed players to execute various sexual positions in order to satisfy the insatiable needs of a girlfriend after a successful date. The revelation of this game being playable through a simple hack forced the ESRB to change the game's rating from Mature to Adults Only, forcing many retail stores to remove it from their shelves. Grand Theft Auto IV continues the tradition of dating women in the game, but the invitation for sex after an evening on the town is supplemented by only featuring an exterior shot of the building you're getting laid in.

While the Hot Coffee incident was limited to just a single title, the ability to pick up hookers, have them pleasure you in a dark alley, then get your money back by killing them has been a feature of all Grand Theft Auto games since their Playstation debut in 2001. Sex has always been a taboo subject in video games, but encouraging you to treat your girl right and getting your dick wet as a reward is clearly more offensive than murdering a cheap trick you just contracted a STD from. 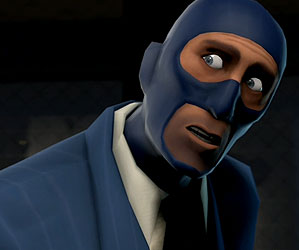 Insinuating the Scout's mom loves to fuck, then blowing the spy's head off, spraying eyeballs, brain matter, and skull fragments all over the window behind him.

Valve's "Meet the Spy" video profiles one of the characters from their Team Fortress 2 game. After an alarm goes off at the Blue Base, the Spy briefs his fellow teammates on further evidence that their security has been breached, some of which includes photos of the Scout's mom engaged in pornographic escapades with the enemy. Anxiety and doubt linger over the remaining members of the Blue Team as they wonder if the Spy is really one of their own. After the Soldier takes a shotgun to the Spy's face and instantly turns it into Bordelaise sauce, their concerns prove to be misguided.

Although showing the Spy's head explosion and implicating the Scout's mom having a fondness for a buttery French baguette was okay, Valve thought the word "fucked" used to explain the Blue Team's predicament was too offensive and bleeped it out. 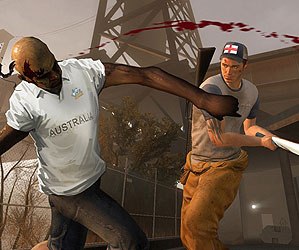 A game that encourages and promotes the violence of undead creatures that don't really exist. 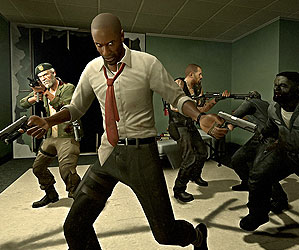 A game that encourages and promotes the violence of undead creatures that don't really exist.

Valve's Left 4 Dead 2 is poised to hit stores in November. Being a direct sequel to its predecessor that only came out a year ago, many arguments among nerds and dorks alike suggest the game is virtually the same in gameplay: you've got an arsenal of weapons, there are a shitload of zombies, and you need to blast them all to hell.

The government of Australia has decided to ban Left 4 Dead 2 for its "realistic" violence, seeing some distinct difference to the arsenal of weapons, shitloads of zombies, and the need to blast them all to hell presented in the first game and comparing such events to real-life zombie killing. While they had no reservations allowing the public to enjoy the original title, they draw the line at a sequel that allows players to bludgeon zombified Australians with a cricket bat. 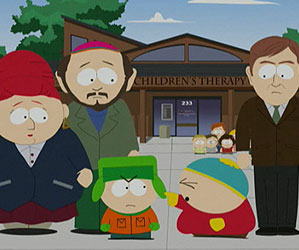 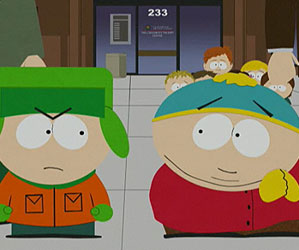 One of the most outspoken cartoon characters in history is South Park's Eric Cartman. He doesn't have a fondness or trust for Jews, stereotypes virtually every race, is afraid of the growing number of Chinese, and has absolutely no qualms with sharing these points of view with anyone.

In the season 11 episode titled "Le Petit Tourette," Cartman's screams, "Piss out your ass right on to Kyle's mom's fat fucking Jew face!" after calling her a fat Jew, Jew bitch, and a big-nosed kike. He does this proudly and publicly under the guise of suffering from Tourette Syndrome. The only portion censored from his horrific anti-Semitic tirade is the word "fuck." This is just one of many fantastic scenes from South Park episodes that mock the absurdity of censorship. 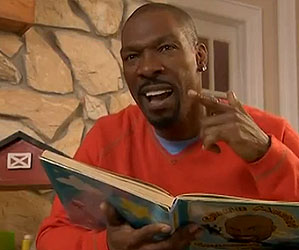 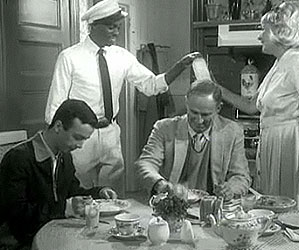 Dave Chappelle's hilarious three-year stint on Chappelle's Show didn't necessarily break any boundaries already handled by Eddie Murphy, Chris Rock, and Richard Pryor, but its quick wit engaged intolerance by simply making an example out of racism and bigotry through their absurdity. Unfortunately, many of Chappelle's skits were constantly bleeped out due to profanities. Yet, the one word that was not once censored during the entire show's run to protect our sensitive ears was the N-bomb.

Skits such as "The Niggar Family" were rife with racial overtones with no portion of it muted, bleeped, or dubbed over. However, when Charlie Murphy sits down with some kids, plenty of bleeps decorate story time as he advises them to snuff a motherfucker who steals your shit instead of calling the Five-O.

Let patrons of your business know they can feel safe inside your establishment from the tyrannical posturing of worthless politicians.

I Think MSNBC Has Turned Me Into a Super Gay Racist

The constant badgering about how horrible I am for simply existing has finally made me change my ways.

Take our specifically formulated and carefully constructed test that analyzes, scores, and rates your level of racism.

The New Mental Discharge Has Arrived for Some Reason

After a long hiatus, a bout of lockdowns, a ton of hysteria, and a tiny burning sensation, Mental Discharge is back to give running a web site one more go.