My new robot is a metallic monster, a sleek silver hound dotted with blinking lights and I/O ports. It recognizes my face, responds to the sound of my voice, and can help me monitor my house via laptop while I'm away on business.

But the damn thing couldn't kill a spider.

When I shelled out $1300 for this Sony AIBO, I expected a devil dog with blood-red eyes and mandibles of doom. Instead, I got a foot-high tinker toy that couldn't run down a turtle, let alone tear it apart in a bloody frenzy.

Does my AIBO attack young children? Is it responsible for the 400+ dog-bite related fatalities in the United States every year? Can I tack "Beware of AIBO" signs on my fence? Hell no. The closest I get to security from AIBO is a voice-activated digital camera function. I can get some great shots of burglars stuffing my AIBO into a duffle bag. 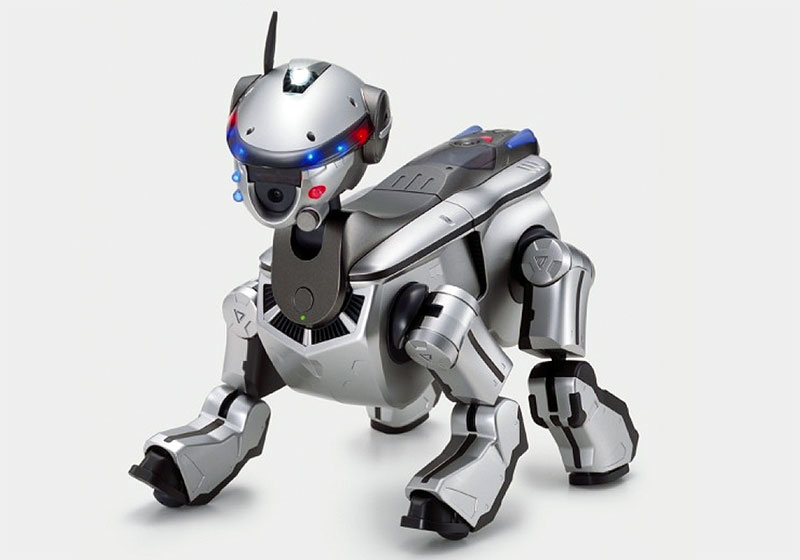 The Sony AIBO ERS-220 is just too uselessly adorable.

Where are the razor-toothed dogs of doom capable of rending friends and family limb from limb in less than a minute? Where are the killer robots that Hollywood promised would be crushing our dry, bleached-white skulls with their cold, metallic hands?

What is the Matrix? It's a crock of shit, as far as I'm concerned. My AIBO runs fortune-telling software, not a high-powered network that enslaves my mind in a fantasy land. What I wouldn't give to wake up to a future where gigantic death machines floated overhead, promising certain death should they discover that I've escaped their evil grasp.

Gargantuan robot machines do our bidding in America's finest manufacturing centers. Diminutive toasters with buzz-saws duke it out on Comedy Central. Fantastic. But where are the robots Hollywood has been promising us since 1950? Where are the claw-handed, laser-mounted, self-sufficient death machines that go around stepping on scantily-clad cat girls in Japanese anime?

I thought Sony gypped me. The world is filled with killer robots. Hollywood says so, and I know it to be true. Casting my mechanical mutt aside, I immediately set out to find a robot capable of mass destruction.

The Panasonic Arc towers eight twelve feet above its human master, a scattershot mess of wires and metal bound in the shape of an eagle's talon. This abominable hook whines and whirs as it swings on an axis suspended from the roof; it thrusts itself to the left and fires unstoppable gouts of blue flame.

Meanwhile, halfway across the country, Iguana Robotics' Running Man robot leaps over uses finely tuned sensors to leap over objects. A biomorphic robot, the Running Man mimics a pair of human legs in a quest for all-terrain mobility.

Sound cool? Well, they aren't. The Panasonic Arc is a clunky, barely mobile robot entirely incapable of chasing down and killing our enemies. It's a welding robot. It makes bright, pretty sparks. The Running Man is a pair of legs and nothing else, save for the hinge that keeps it from falling flat on its spindly robot legs.

I could have had a real dog for less than a $1,000. I'd have bought shots, collars, leashes, the works. Instead I've got this little yapping waffle maker to protect my valuables. My only chance is to lure my assailants into a swimming pool and toss the dog in after them.

Curse you, Sony, for taking my money. Curse you, Hollywood, for giving me dreams. From now on I'm spending my money on sensible things. Specifically, that new ASIMO robot from Honda. It walks and talks and I'm pretty sure it can shoot lasers from its eyes.

Jennifer Lawrence and her fellow celebrities aren't the only victims of this devastating attack on privacy.